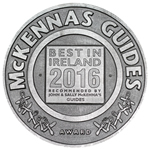 DWS brings the entire world of wine to Corporation Square.

It’s an impressive achievement to have traded in the wine business for more than sixty years, as Direct Wine Shipments has achieved. But it’s equally impressive to realise that the third generation of the McAlindon family to run the business – brothers Peter and Neal – have between them over fifty years experience of discovering great wines, selling great wines, educating people about great wines and, indeed, making great wines, as they do with their own stunning Priorat wine, Creu Celta. DWS is rare in being a company that spans the entire world of wine, and traverses the entire culture of wine, from the initial sourcing to the final, delightful supping that lies ahead when you buy a great bottle here. Best of all, the McAlindon family do it with charming modesty.

“Peter and Neal are managing DWS with flair.
The McAlindon brothers, Peter and Neal, are the third generation of the McAlindon family to run the dynamic Direct Wine Shipments. Just think what that says about the family’s effort and foresight, beginning with a little shop back in 1954 called Duncairn Wine Stores, and think of how over sixty years they have steadily, organically built the business, all while building relationships with suppliers, all while developing the Aladdin’s Cave of wines at Corporation Square. It’s an incredible achievement, but it’s all the more incredible when you consider they don’t just simply sell wine. In addition to having an enviable selection right across the vinous world, they are also wine educators, they are wine celebrators at dinners and events and tastings, and they are even wine makers, for they produce their own Creu Celta from vineyards which the family owns in Priorat. DWS is one of the greatest business success stories in Northern Ireland.”

“The pioneering spirit which gave birth to a family – run drinks business in the 1950s is still very much alive in the McAlindon brothers who lead it today.”

Licenced & Catering News Award 2014 – Off Licence of the Year

What the judges said:

“The Winner of this award provided an exceptional range of products. Staff were real experts, happy to share their knowledge and make some great recommendations. A fantastic customer experience”

IWSC Independent Retailer of the Year 2013

Notes from the judges;

In praise of Direct Wine Shipments, they saw them as being genuine specialists, sending in products that really showcased their speciality buying choices. They have incredibly good value pricing on a wonderful selection, as well as wine tastings and excellent customer engagement. Judges also made special reference to the retailer being unique in their efforts, despite the economic austerity that has been linked to Belfast in recent history.

“Wine communicators extraordinaire… Few companies show the same eagerness to make wine more enjoyable, and there’s a first-rate set of wines to support this.” WHICH? Wine Guide, The Consumer Association

“You won’t find expert knowledge in every off-licence or supermarket but thats exactly what you get at Direct Wine Shipments. Oh…and there’s plently of choice, value and a fair dose of atmosphere” The Irish News

“One of the best independent merchants in the UK” Tim Atkin M.W. – The Observer

“DWS’s story is one of gritty survival and gradual transformation from Fifties corner shop to thoroughly modern wine merchant. DWS’s wines may be serious but the family presence generates fun and enthusiasm.” Anthony Rose – The Independent

“One of the best merchants in the UK, offering tastings & courses. Great mix of Old & New World” Robert Joseph – The Sunday Telegraph

“There really are some superb wines on this list, in fact it’s hard to find anything I wouldn’t want” Oz Clarke – Oz Clarke’s Wine Guide